Featuring Grimethorpe Colliery Band’s flugel horn, Mark Walters, the audience was treated to a concert version of Brassed Off with narration from the Yorkshire Tenor, Jacob Walsh.

The concert was thoroughly enjoyed by all who attended. Not only was incredible music heard, but the band launched their new CD, Bandstand.

Pictured with members of Lofthouse 2000 Brass Band is Keeley Harrison, Fundraising Manager, who came along to a recent rehearsal to receive a cheque for £1000 from the concert and to thank the band for their efforts in raising money for the Hospice! 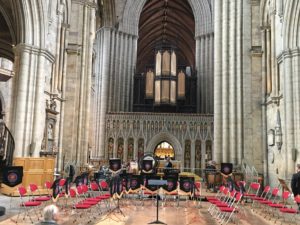 The weekend of 1st/2nd June saw Lofthouse Brass Band play in some of the counties most amazing venues. Firstly Ripon Cathedral where the band finished a creditable 5th in the entertainment contest with principle euphonium, Bob Blackburn, winning the Best Euphonium prize. Secondly Leeds Town Hall where the band shared the stage with the famous …

It was another great contesting weekend again for Lofthouse Brass Band on March 5th at Hudderfield Town Hall as they came fifth in the Third Section at Yorkshire Regional Championships. Seen by many as a difficult challenge for the band giving its first public performance of Dan Price’s Darkwood in the third section, a section …

We are presently looking for a Solo Trombone, Drummer and Eb bass. If you are interested please email us.
Powered by Popup Zen
We use cookies to ensure that we give you the best experience on our website. If you continue to use this site we will assume that you are happy with it.Close